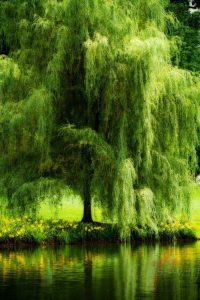 Not unlike the subconscious layer of the mind that drives most of our behavior and interaction with other fellow beings, plants also have an underground system for sending out signals in affinity with other kin or other species. There is a lot going on underneath the surface to which we humans are not privy. But if you are already a sensitive green thumb who does not think it strange to talk to roses and tomatoes while keeping them nourished, you may be an easy convert. Similarly, you may be one of those people who love plants so much that you keep the radio playing or whisper sweet little nothings into their ears with spectacular results. For someone already convinced that plants “have feelings,” the recent scientific evidence that plants talk to other plants surely may delight you as much as it did me.

Take, for instance, the willow tree. I have loved willow trees since childhood. They have always given me a sense of refuge away from the authority of parents and school where I could languish under its boughs and pluck off the petals of a daisy one by one, counting my sorrows. My willow friend seemed to share my woes, even as I left its hollow to look back at its majestic, graceful drapery. I feel the same beckoning now when I pass by the maternal giant. But I have since looked upon my stalwart with an elevated respect upon learning that if it gets infested by a bug, it will send out signals to warn the maple tree nearby and bolster its resilience. Further fodder for my own imagination that it heard all my thoughts behind the curtain of its canopy! But the willow tree is not a lone hero; poplars and sugar maples also warn others about insect attacks by releasing insect-repellent chemicals to keep them at bay.[1]

In my forays into the world of plant communication, I am actually more interested in what plants have to teach us, than how they resemble us. But the language of the science developing around plant communication evokes such parallels with our own. Do plants demonstrate intelligent behavior? Is their root system their brain hub? Do they cooperate? Do they have a sense of solidarity? Do they have a memory? Some researchers have even coined the term vegetal neurobiology to describe their electrical and chemical networks through which messages pass.[2] Had I chosen nature over people in my studies, I would have liked the offbeat rabbit hole, exploring questions that could draw consternation from the community, if the proof is not up to the par. But it seems we are still on solid ground in the discovery of some remarkable connections that are made in the underground realm of the plant world.

I could have crafted it myself, tongue in cheek, but the “wood-wide web” has already caught fire (well, not for real) in describing the phenomenon of trees putting out feelers called mycelium through the soil to trade nutrients with their neighbors. Not to mention that the mycelium threads are fungi that pair up with the tree roots to either go in search of phosphorous, for example, so the plant can photosynthesize, or deliver carbon to a plant that needs it. Now maybe that is something we can learn from plants, how to redistribute food so that everyone on the globe has an adequate daily intake. If all things tend towards equilibrium, sadly, human beings have made a grave mistake and read the book on entropy.

But now, back to greener pastures. Of course there is some healthy competition going on. But more fascinating is the pick of trees that receive a delivery of nutrients, generally carbon. Thanks to the scientist, Suzanne Simard, who pursued the question, we now know that tree species can distinguish their own kind even some distance away. The bigger, older pines have stronger, more developed mycorrhizal roots that can carry more carbon. So they channel it to nurture seedlings of the same species. With a few more experiments, scientists were able to show that they can also recognize and favor their own offspring or next of kin, earning them the honorific of “mother-trees.” And the trees are not alone in this affinity for their kin. The next time I am taking a stroll by the ocean, I will look for the sea rocket on the dunes with its tiny pink and violet flowers and be reminded that it restrains its root growth near its own siblings to generously allow them to flourish, while next to a competing plant, it will develop a more vigorous, expansionist root system.

The more I know, the more I feel for these creatures, especially the ground cover, a bit like the sea rocket, that cannot talk back to us goliaths before we come crashing down on them with our giant feet. They do have defense systems against insects, but I have not heard of any yet towards mammals. Take the sagebrush. I have not been to the Nevada desert where you will find it in abundance, and in large swaths of arid areas in the West of North America. But Nevada seemed like a good choice, to talk about underground weaponry. There you will find well-tuned chemical defense weapons being handled by the sagebrush, that calls in the rearguard, its neighboring plants, to repel the caterpillar snacking on its leaves. The sagebrush secretes a substance that stunts the caterpillar’s growth, while the other plants do their thing as well against the oncoming predators.

There is only one problem: what to do about the goats and rabbits that especially enjoy those fresh, young leaves. Sigh. This past summer, one of my new-found joys was catching sight of the hare that decided she liked our lawn enough to come grazing. She usually came once in the morning and once around sundown, undeterred by our stares and whispers from our backporch. The real surprise, though, was her miniature copy, who followed her in tow, and vanished after a couple appearances, until Mrs. Hare too never returned. As for repeat performances, I would need to consult with the fox to see what he has been up to. However, the best performance among hares I have ever heard about is courtesy of my partner Gilles whose story makes me smile every time. On a camping trip by a river some years ago, his fellow campers were woken by some strange animal activity over their heads only to discover, upon opening the flap, that a group of rabbits found it utterly entertaining to be using the tent as a slide, by taking turns in succession. If that is not playtime, I don’t know what is.

Still, it is a pity the grass cannot at least have a few words with the rabbit and other herbivores before they start to nibble. There is little to defend it there, although perhaps all we have to do is wait for the next wave of cutting edge research. But I won’t keep you waiting, as you will see I have saved the best for last. There is indeed one example, in my own modest stash of knowledge, of plants communicating with a mammal. But you would have to go to Borneo, deep into the dense tropical forest, to behold the pitcher plant that can interrupt bat communication, luring the bat to its den by echoing back. I have not seen the pitcher plant in real life, though I am sure it is a foreboding plant. And in any case, having been to places in Indonesia like Bali and Kalimantan, there is more than the captive appeal of the one plant to put me on my guard. Beauty and danger make a fine pair in the jungle.

So the plant and the bat, which is sounding more and more like the princess and the frog or the mermaid and the sailor, find each other, like lovers under a magic spell. It is a perfectly mutual engagement, and I promise you this is no fairy tale. And actually it is not very romantic either. The bat comes to roost in the plant’s vessel during the day, and the plant gets its fertilizer from the bat, as its guano or droppings supply the nitrogen it needs.[3] It is no wonder that the preferred rest stop is this species, the Nepenthes hemsleyana; research shows that the bats are healthier and have fewer parasites than in other roosts. But with the degradation of the forest, no thanks again to our dominating homo sapiens, that is like asking for the five-star hotel in the middle of a wasteland. To bring this to a close, I have one more juicy tidbit just to keep the story straight. While the N. hemsleyana is the only plant to attract a mammal by imitating the echolocation of the bat as its cue call, you will not be disappointed to know that other plant pitcher species attract mammals that poop into their pitcher, like the N. Iowii. [4] Tree shrews are drawn to the N. Iowii by the sweet smell of the nectar around its rim. Although I will say that if the shrew had any sense of the aesthete, it would fall for its stunning beauty. And that could be fatal as the plants are or were carnivorous, as the research suggests the pitchers increasingly prefer (or need) the excrement over the meat.[5]

With that, I will now exit this labyrinthine journey into untold plant secrets and encourage you: next time you go to your garden, go ahead and talk to your rosebush. But remember to give a nod of thanks for the invisible ways she takes care of her community.

[3] Stephanie Pappas. 2015. “How the Hungry Pitcher Plants Get the Poop They Need.” Live Science, July 9. https://www.livescience.com/51501-pitcher-plants-lure-pooping-bats.html.

[5] I got that hypothesis off of Wikipedia, so if you are really interested, you make have to check a few more sources.