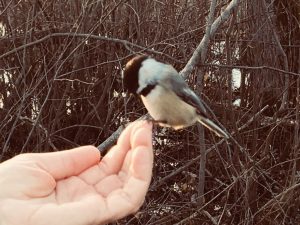 Though not a denizen of Niger, the chickadee (the state bird of Massachusetts) symbolizes my affinity described in this article

When the first call to prayer wrestled me out of a deep sleep, it was still pitch black in the room. Nothing stirred, not a rooster could be heard, and even the guards kept their silence. This was license for me to drift back into a luscious sleep while the echoes of the muezzin faded away. I’ve heard it said before from a health sage that it is best to wake naturally and to regulate your own body rhythms to the season, rather than revert to the rude awakening of an alarm clock, and by coming out of sleep slowly, you are more likely to remember your dreams. This I have known to be true in my own experience.

Well, this particular morning proved to be wholly different from the routine. I was gently roused by a single, rhythmic chirping much before the alarm was set to go off. I admit it was not the first time a birdsong filtered into my consciousness in the early morning, which I was quick to ignore. This time I found the little creature persistent and I couldn’t resist listening more intently. The twilight was sifting through the crevices, but the sun would not rise for another two hours. In a solo performance, my avian friend whispered his message into my bedroom window, as if wanting a private chat, not with the world, and not in the company of other flying playmates either. It seemed as if a spell capped everything else in a state of slumber. Keeping our secret, I rose quietly from my bed in the grey light, like a soft veil over my eyes, moving with the cadence of his song. I could barely discern the garden in the inner courtyard in the half darkness, but determined not to break the sacred bond as long as it held, I crept across the floor quietly without turning on the lights.

All the while serenaded by my secret friend, I felt myself taking my time, as if time itself had slowed and I had become part of a silent motion picture, careful not to make a sound. There was a certain quality to the moment, the routineness had disappeared and I intuited my feathered friend saying, “Are you all here, like I am?” Yet he has a fondness for routine, his own refrain repeating itself over and over. And he returns the next day and the day after, with an unabated enthusiasm, perhaps joyful to join the morning of a new day, not just any new day, something far grander, awakening to a rainbow surprise each time.

The muted palor and temperature of the room at that time of morning neutralized my senses, and the warm water under the shower felt like putting on velvet robes. The office and the work day loomed far off, and just as the natural light began to coarsen the shapes around me, the dust in the air thickened. I continued in my serene stride towards the kitchen without hastening to switch on the light. But by then, the sun had risen and I could see the guards getting ready to change shift. So I fired up the coffee, flicked on the switch, and let in the noises of Niamey’s traffic. The city had come alive and in thirty minutes I would be in the car on the way to the office. My chirpy friend had already left me to my busy-ness. Like pressing the reset button, all was in motion, all was a-frenzy.

At the office, I flick on the computer, the light, the air conditioner, the coffee machine. All signals are ON, and the desert heat is rising towards a noonday sun. As if snapped out of a dream, I am now staring past my computer screen to a clutter of broken chairs and old equipment, petrified by a layer of desert dust outside my window. No one, especially the gents, adjusting their clothing, would take any notice of the junkyard astride the men’s toilets. Geckos dart in and out of the carcassed debris and up and down the walls. Two red-bellied birds land on the metal grating on my window, their tiny bodies working hard, as they bellow in unison. I felt an unprecedented reverence for their form of prayer.