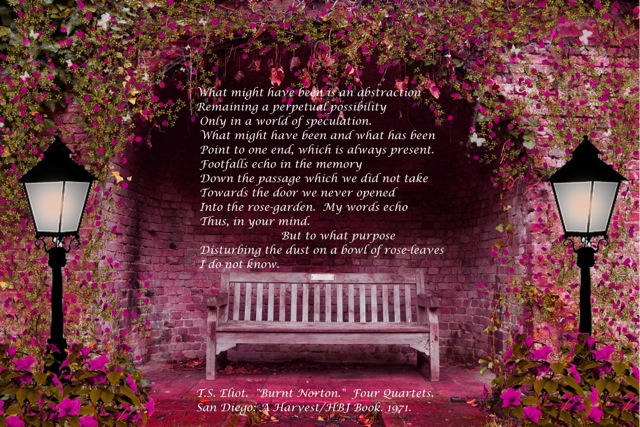 If time does not exist, then it cannot be ceaseless. Sitting at the boulders’ edge of the Potomac River at the tail’s end of a craggy, waterlogged path, I sense something more in my connection to the fast and furious current, more than the rapturous beauty of nature’s wild rush. It’s that endless quality of the river that keeps me there, as if by walking away, it will cease to flow. It reminds me of an eternity that I cannot pin to rock, river, or air; it is simply everywhere, arising, subsiding, recreating. And this infinity is awake in me like an underground current coursing through our collective subsconscious.

What if we had no measure nor instruments of time by which to mark our hours and days? Would that be frightful to most people or somehow exceptionally indulgent? My sister’s reaction to the show “What is Time?” at the Montreal planetarium was more along the lines of “disturbing.” Is time an illusion? Is time accelerating? Can we go back in time? Is our aging the direct result of being “in time”? Is our future already determined or even partly implicit in the order of the universe? Posing so many questions about time and what we take for granted can be dreadfully unnerving.

I seem to have a need to come to terms with the question of time myself, as the topic keeps cropping up again and again – the planetarium, the Smithsonian Museum of Natural History, and the books and documentaries that “speak” to me. Scientists tell us that time is a dimension of space and, as my experience in the Rockies last summer evoked so well, it is difficult to separate the two when contemplating rock that dates back as far as 1.7 billion years.

I will never forget the lines in a poem from T.S. Eliot* that have stuck with me for years, cocooning my obsession with time in an enigma:

Time present and time past
Are both perhaps present in time future,
And time future contained in time past.
If all time is eternally present
All time is unredeemable.

Even though we experience life’s events in a sequence, is there really a past and a future time? Eliot’s own preoccupation with humanity’s relationship with the universe drew inspiration from the mystical roots of both Western and Eastern religions. Were he alive today, he could be enjoying a candid and lively conversation with a physicist or an astronomer about issues that formerly polarized religion and science. But as we can see from works as recent as the The Tao of Physics by the physicist Fritjof Capra in 1975,** there is an evolving dialogue between scientists, particularly quantum physicists, and philosophers, cosmologists, and mystics. Capra’s work itself is dedicated to uncovering these parallels between modern physics and Eastern mysticism. The advances in quantum theory and relativity theory are shaping a view of the world ultimately very similar to the views of the mystical traditions in Hinduism, Buddhism and Taoism (and also the Western schools of mysticism) (p. 19). Eastern mystics have acquired, through states of enlightenment what modern physicists have come to understand through scientific experiment.

Relativistic physics explains the conundrum in Eliot’s opening lines, in a way that deeply challenges the presumptions we make about time. Science has already established that: (a) time does not exist independently of the observer and (b) time is one dimension of a four-dimensional space-time pattern. So any measurement of distance necessarily involves time, as it must also include a measure of the observer’s state of motion.

Capra (1975) uses the frequently cited examples from outer space to demonstrate the point. Light needs time to travel from the object to the observer. It takes light eight minutes to travel from the Sun to the Earth, so when we observe the Sun, we are seeing it as it existed eight minutes ago. We see the nearest star as it existed four years ago and with powerful telescopes we may observe galaxies as they existed millions of years ago.

When the speed of an object in space is accelerated, e.g., approximates the speed of light, something interesting begins to happen. Subatomic particles moving with 80% of the speed of light live about 1.7 times as long as their ‘twin brothers’ and at 99%, they live about 7 times as long. This does not mean that the intrinsic life of the particle has changed, rather, from the perspective of the laboratory observer, the particle’s tick, like a heartbeat, has slowed down (Capra, 1975).

We have all felt moments in our lives when time seems to decelerate. I have even had watches stop and restart of their own accord unpredictably. Years ago, when the jeep I was in rolled over the side of the mountain, I felt no emotion nor sensation, nothing but the sense of being a witness in a slow motion movie, doing inventory on the body. But what does that have to do with particles that travel at near-speed of light unwinding their internal clocks? The cutting edge debate is the role that consciousness plays in materializing our reality in the physical world (see the Institute of Noetic Sciences, whose scientists are conducting experiments on mind-matter interactions). Is consciousness the great Influencer on the play of the particles?

Have you ever felt timeless? If so, do you know when it happens? As a meditator, no two sitting experiences are the same, but I cannot forget the extraordinary experience of being ‘outside of time’ – no thought pervaded my senses and I could feel myself expanding from inside out. I was free of any external impulse to do, to go, to think; I felt immersed in vast ‘beingness.’ My experience also tells me that timelessness is not limited to meditating with eyes closed. I have known moments when the immensity of the present and the present’s aliveness crowded out all sense of worry, otherness, past or future. And yet everything seemed to matter, to have value, to deserve love. There was a palpable sacred aspect to it. I could be on a mountain peak consumed by the grandeur of the unending peaks and rifts, or I could be sitting in a coffee shop. It has little to do with external factors. Time and space are particular states of consciousness, as the Eastern mystics would say.

Being ‘lost in time’ is quite a wonderful alternative to being in the trap of ‘losing time,’ a lament often heard in our everyday existence of getting things done. We are so inured to this here in the West that many of us would rather simply stop the external clock, than slow down.

But wait (ah yes, wait!). Maybe there is something sanguine about the acceleration of evolution and the pace at which society operates, synced to apps and i-pads. Maybe it is a fruitless focus to try to slow things down. Physicist Peter Russell calls it “waking up in time.” If we can mirror the outer space exploration in our inner space and speed up our own personal transformation, we may stand a chance at coping better with the millenial challenges we helped create. And that is a topic of its own.